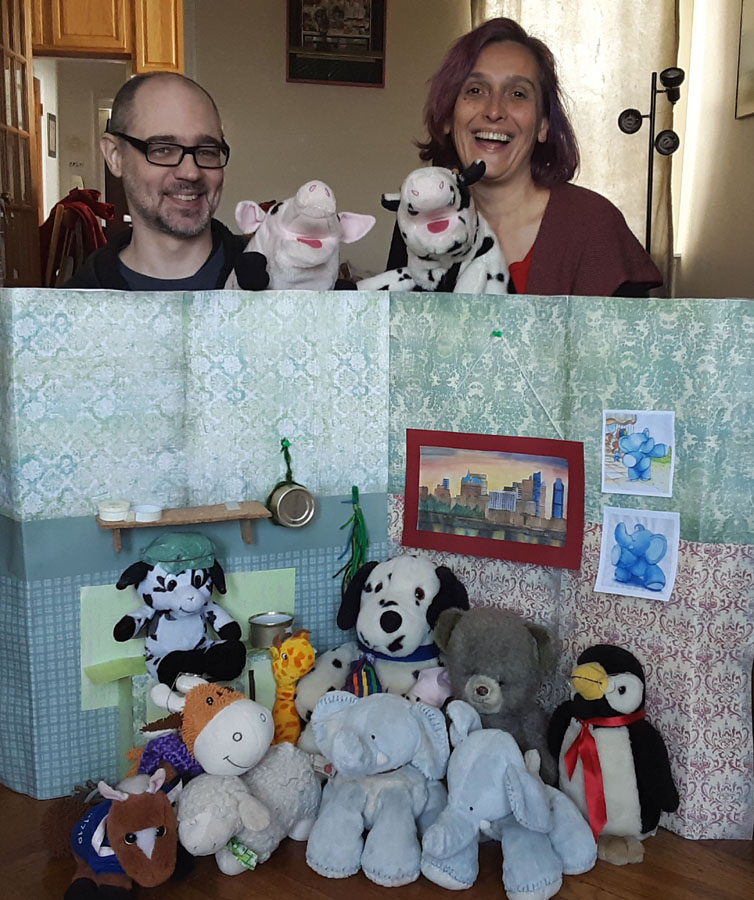 Originally from France, I moved to the US via Boston when I was 17. I landed in New York City to go to graduate school, and got my MFA in sculpture from the New York Academy of Art. For 15 years, I mostly did large scale public installations, using recycled plastic shopping bags.

In March 2020, New York City went on lockdown, and my art studio shut down for 3 months. I was looking for ways to stay creative, and sane during confinement, and hopefully make people laugh. Dan and I had played with the puppets for years, and never had the time or focus to write scripts for them, let alone have a regular show. As I started making simple PSA videos, I learned more and more about writing, directing, and editing... and all the videos became more complex and rewarding.

I now host a regularish show on YouTube: Cow and Covid19, Don't Lose Your Sh*t.

You can see my artwork on my website at: www.IsabelleGarbani.com
You can also see my work with the elephants in the children's book, The Secret Elephant.

Originally from Maine, Dan's first pet was -- you guessed it -- a pig. Growing up he also had more cats, dogs, pigs, steers, and chickens. His first job out of college was working as a wrangler and ox-driver on a major motion picture. When he started interviewing for computer jobs, one hiring manager asked skeptically, "But do you know, there aren't many oxen in Boston?"

Nonetheless, Dan worked in video games in the Boston area for several years, including the company where Dan and Isabelle met. After that he started working as a college lecturer in math and computing, then moved to New York to join Isabelle and play drums in a punk rock band. He's currently a permanent lecturer at CUNY, and also researches, writes, and comments on old-school tabletop roleplaying games.